A hard-hitting film about the devastating impact organised crime in Bedfordshire has on vulnerable people has been shortlisted for a prestigious national award.

The two-minute animation – ‘Tackling organised crime in Bedfordshire is everyone’s business’ – was commissioned by Bedfordshire Police and Bedfordshire’s Violence and Exploitation Reduction Unit (VERU) and made by Luton based digital content agency Clearhead earlier this year.

Thanks to an overwhelmingly positive reaction from the local community and a record number of reports from the public, the film is now in the running for a coveted EVCOM London Live Film Award, and is shortlisted in the Animation category.

Detective Chief Inspector Aaron Kiff, from Bedfordshire Police, said: “The BAVEX campaign has played a massive part in our comprehensive response to violence and exploitation linked to organised crime here in Bedfordshire.

“Tackling organised crime really is everyone’s business and the film has brought lots of different agencies together to tackle this threat in a coordinated and joined up way.

“The feedback we have had from partners and the public has been wholly positive and it has made a massive difference in terms of raising awareness among key professionals as well as encouraging people to come forward.”

The film’s launch coincided with Bedfordshire Police recording its second highest ever number of reports from the public, known as ‘intelligence submissions’. 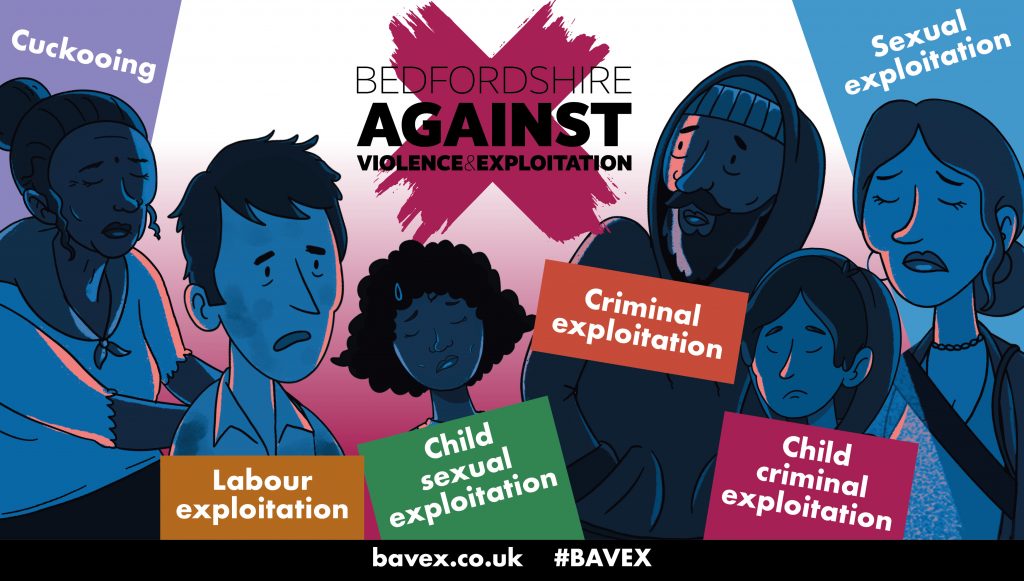 Around three quarters of people who took part in a survey during the campaign’s launch also said the film had improved their understanding of organised crime and exploitation.

In one case a parent got in touch to raise concerns about their child carrying a knife, having seen the video posted on Instagram.

The film has since been viewed tens of thousands of times across the likes of Snapchat, Facebook and Instagram.

As part of the campaign launch the video was also played on an ad van in town centres and at colleges, restaurants and supermarkets across the county, and continues to be played in schools.

It has also formed the basis of training which has been delivered to hundreds of frontline workers across the county.

Lisa Robinson, exploitation lead from the Bedfordshire Violence and Exploitation Reduction Unit, said: “This film was used to launch our exploitation campaign in March, a campaign that continues to have a clear call to action. We are not just asking the public to watch and learn.  We are asking viewers to pledge their support online, via our social media channels. It has been – and continues to be – a huge success.”

This shortlisted film continues to be used by Bedfordshire Police and partners. In the summer it was used to reach and talk to the parents of local young people – shared on platforms such as Mumsnet, Snapchat and as part of a live Facebook webinar.

Alex Lawrence, Co-Founder and CCO, said: “Our focus was to shine a light on exploitation and to create a film that would ‘shine a light into the shadows, draw attention to the dark and make it impossible to hide’.

“A key challenge was having to deal with some very adult themes and using creative approaches in a way that would evoke emotional response and action without shocking or disconnecting the viewer.

“Using stylised, hand-drawn animation techniques allowed us to offer a simple and streamlined way to connect with the audience. It was an incredible project to work on – and a huge privilege to be part of something so impactful and so important.”

Weaved into the film are a number of key messages:

Bedfordshire Against Violence and Exploitation is a countywide campaign designed to raise awareness and reporting on all forms of exploitation, especially those linked to organised crime. This includes things like county lines, modern slavery, cuckooing, human trafficking and child sexual exploitation.

The London Live Film Awards will take place at the Mayfair Hotel in London on 25th November 2021 and it is at this event that the winners will be unveiled.