Good morning and thank you everyone for taking the time to read this month’s festive edition of VERU in View. Far from winding down, December has been a month in which the VERU has taken centre stage at a national level in some high profile and beneficial spaces to advance the fantastic work we are doing with young people and communities.

I want to end the year by reflecting on my own VERU journey since its inception. We are now in the third year of Home Office funding and I have seen the VERU grow from being an idea on a A4 sheet to paper –  with no staff but myself – to an improving violence reduction unit currently staffed by 13 of us. As a VERU team we have in that time provided a unique in-house intervention service via our in-house Youth Intervention Specialist (YIS) team, and supported dozens of community projects. Collectively, our VERU community projects and YIS team have worked with an impressive 17,000+ young people and families over the years.

I have proudly led the VERU team, designing, developing and implementing strategies and plans which support the development and delivery of activities to prevent and reduce violence and exploitation. It has been my aim to provide strategic advice and guidance to wider stakeholders whilst building on existing collaborations around the reduction of violence and exploitation. The aim being to ensure that an effective and efficient organisation is in place to support VERU and county-wide priorities and objectives.

The creation of a VERU Village has allowed me to lead a team that works with and for communities, ensuring that there is a willing understanding of the root causes of violence and exploitation and to ultimately make a sustained impact. In order to do this I have worked hard to encourage good community engagement and done my best to maintain relationships with key local, regional and national stakeholders. The result has been an accumulation of impactful and sustained ongoing partnerships with key stakeholders, including our diverse communities of Bedfordshire. The work continues, and there is much more work to be done. It is hoped that in the meantime our VERU work has provided a ground-breaking, aspirational and transformational foundation for the county.

I want to say a massive thank you to everyone who has supported me over the years, my VERU team of Ade, Benita, Betasha, Claire, Debbie, Dee, Draz, Jon, Lisa, Roseann, Sheldon and Simon. My VERU Oversight Board members and Chair Robin Porter, CEO of Luton Borough Council, Commissioner Festus Akinbusoye and all our VERU key stakeholders and partners. Without their support the VERU would not be where it is today. We are very clear….the VERU is a project which is only made possible with the help and support of its partners!

December is always a particular time of reflection and evaluation for me, and I am amazed at the work and progress we have continued to make, particularly over the past 12 months. Evaluation and sustainability were the key components of my last Christmas message, and the independent evaluation of the VERU’s work earlier this year was testimony to the impact we have had here in Bedfordshire. The VERU team look forward to continuing this work here in Bedfordshire with your help, support and guidance. We cannot do it alone and I am immensely grateful for the backing we continue to get from different quarters across the county and country.

Have a happy, safe and relaxing festive period, and here is to the delivery of more great work in 2022.

Head of the VERU

Our Youth Intervention Specialist (YIS) team has continued to go from strength to strength. In all the unit has received 256 referrals since being established just under two years ago; 87 of these have been submitted over the past six months, showing the growth in awareness and trust of the unique and powerful services our experts by experience can deliver.

Our YIS team offering has already expanded to include our Fearless worker Claire Byrne, who is already due to deliver workshops in 11 Bedfordshire schools. This unique partnership between Fearless, the youth brand of the charity Crimestoppers, and the VERU is a massive coup for the VERU and will go from strength to strength in 2022. If you work in education and want to find out more about what the VERU can offer you then visit our VERU Education pages.

Like make other services, we will be taking some time to recharge our batteries over Christmas. Our festive opening hours are included below. We are still here to provide help and support to those who need it, so please visit our referrals page to find out more about our services and to get in touch with the team. 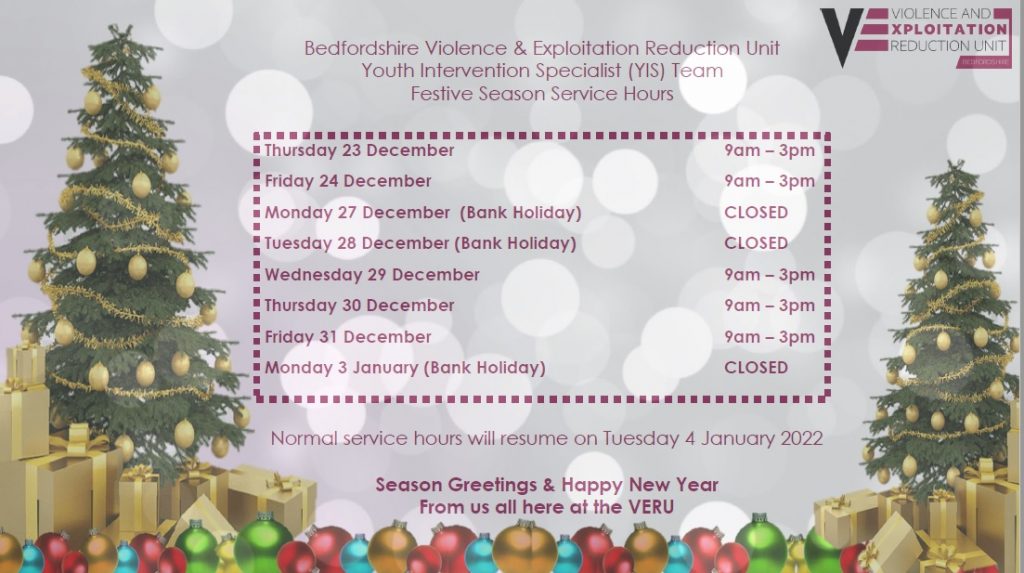 The commissioning part of the VERU is a massive part of our work. We have invested around £300,000 this year into community projects focussed on prevention and early intervention with young people, reaching thousands of people in the process.

This includes thinking outside the box – and occasionally even thinking about a horsebox! But on a serious note, Suzanne Adamthwaite and Denise Sadleir from CANter- Equine Assisted Learning & Psychotherapy have achieved some fantastic result working with young people in the county.

Some of their case studies reflect this. One pupil with anger management issues was working one to one with a horse and lost his temper with it. The horse was never going to respond to this and so it was suggested he try a different way of working with the horse, such as talking to it calmly and patting it. The horse responded to this encourage and it was a real teachable moment for the young man, who has not lashed out during the programme since this happened.

Another girl who attended this therapy course had previously struggled with confidence and self-esteem, with her school attendance suffering as a result. However, since she joined this programme she has been much more positive, appears to have made better and more fulfilling friendships and is also pestering her parents for riding lessons. Another pupil has also opened up a lot more to talk about bereavement following horse therapy, both with staff but also her friends. This VERU-funded project is having a major impact on young people’s lives by providing support and direct interaction, as are so many of our community projects.

The Luton Youth Service’s Tree project has this month been running a cookery competition for young people, while we have also been to the Mary Seacole housing association to deliver talks raising awareness about exploitation to their residents. We are working across our VERU Village to make a difference to as many lives as we possibly can, so a massive thank you to everyone for your support!

It has been a busy few months training wise. It is brilliant to see that 162 people have received exploitation related training from Safeguarding Bedfordshire over the past three months, including 116 attending the free multi-agency exploitation briefings and mind your language sessions organised by the VERU. Thank you to everyone who has attended these really valuable sessions – there is a final mind your language session on 24 January which I would encourage people to sign up to if they have not already attended.

The Bedfordshire Against Violence and Exploitation (BAVEX) campaign has also won a national award! The campaign video took top prize in the animation category at the London Live and Film Awards, ahead of content made for the likes of the BBC. The awards recognise the best work across the corporate events and film industries, with products made for major companies like PwC, Unilever, HSBC, Shell and Morrisons, as well as the likes of the RNLI and the Home Office, nominated in other categories. This is fitting recognition for the tireless work so many people have put into the campaign through the Exploitation communications group, with BAVEX doing such a brilliant job of coordinating lots of different work and messages under one banner.

There are some other really exciting projects coming forward over the coming weeks. This includes a big BAVEX campaign looking at cannabis use as well as promoting the Is This Ok? service. Is This OK? is supported by Dame Esther Rantzen and Anne Longfield CBE, the former Children’s Commissioner for England, and offers a free, confidential and anonymous digital gateway for young people aged between 13-18 at risk of, or currently experiencing, sexual or criminal exploitation and/or abuse.

Sara Rowbotham MBE, a local councillor, community leader and former health worker in Rochdale, Greater Manchester, who led efforts to expose the scale of child abuse which took place there, is head of the project and this month presented to the Pan-Bedfordshire Exploitation & Missing Strategic Group, ahead of launching this project here in Bedfordshire early in the new year. Watch this space for further details!

We will also be supporting the Safe to Play campaign, which will give parents and carers safeguarding information around local sports clubs. The project is led by the NWG Exploitation Response Unit, which has already launched the safeguarding code in martial arts. The code was launched nearly four years ago with the support of Sport England and The National Lottery and created as a code of practice for martial arts practitioners including instructors, coaches, clubs and anyone delivering martial arts as a means of being recognised as delivering good safeguarding practices within their organisations.

The Safeguarding Code recognises clubs or providers in England who have demonstrated that they have reached and maintained good safeguarding standards and is a free service ​which benefits clubs, instructors, volunteers, parents as well as organisations and venues that hire out their facilities (church halls, village halls, community centres, leisure centres, gyms, schools etc.) and ultimately the students themselves.

The website also includes a section for parents/carers with guidance on what to ask a club to ensure it has good safeguarding processes in place as well as an interactive map containing details of clubs who have attained the Safeguarding Code, helping parents make good choices for their children and offering the club the prestige of being named as having good safeguarding practices in place.

Updates from our partners

Barnardo’s and Parents Against Child Exploitation have organised an online webinar about county lines for parents. The online event will take place on 18 January from 7pm to 8pm – visit the Eventbrite page for more information or to book.

The service aims to: