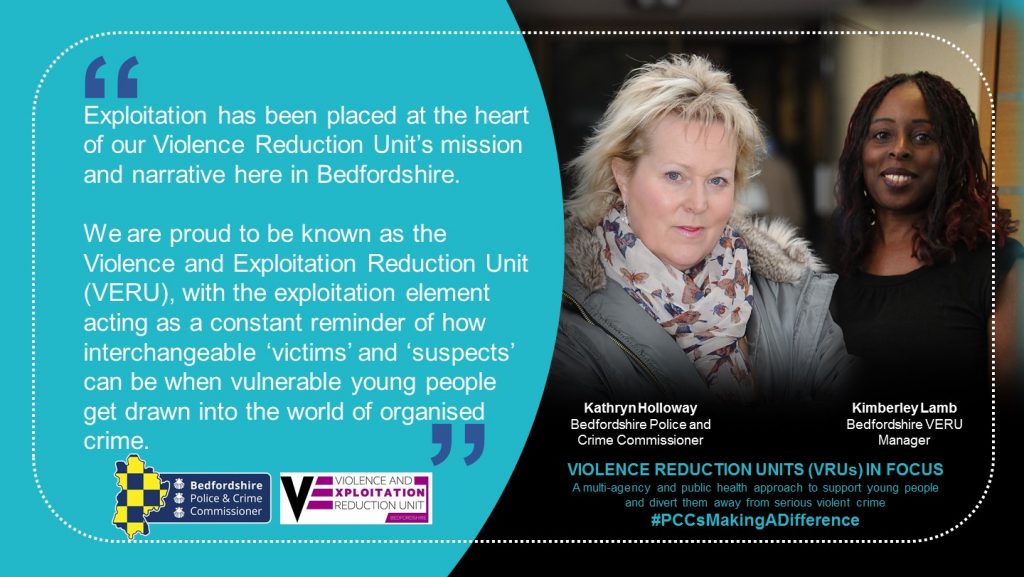 Bedfordshire’s Violence and Exploitation Reduction Unit (VERU) has featured in a national report praising the work of violence reduction units around the country.

The report was prepared by the Association of Police and Crime Commissioners and featured an in-depth focus on different units across the country.

Working alongside the police and partnership colleagues, the Bedfordshire Violence and Exploitation Reduction Unit (VERU) has played a major role in ensuring that there were 200 fewer victims of serious youth violence in Bedfordshire last year, with the number of incidents reduced by some nine per cent.

Bedfordshire Police and Crime Commissioner Kathryn Holloway said: “This means, in effect, that this number of young people are both alive and well and do not have to suffer life-changing injuries from this point onwards. This represents an outstanding success and other PCCs and police forces are approaching Bedfordshire to learn more to spread this good practice.

“Exploitation has been placed at the heart of our Violence Reduction Unit’s mission and narrative here in Bedfordshire.

“We are proud to be known as the Violence and Exploitation Reduction Unit (VERU), with the exploitation element acting as a constant reminder of how interchangeable ‘victims’ and ‘suspects’ can be when vulnerable young people get drawn into the world of organised crime.”

The VERU is making a clear and demonstrable difference to driving down violent crime in Bedfordshire and in preventing both serious injuries and exploitation in the first place, through partners working more closely together than ever before to build plans around those at most risk and working with communities themselves to come up with diversionary schemes which work.

VERU Manager Kimberley Lamb said: ““I am so proud of all the hard work and achievements that the VERU staff, projects and partners have accomplished.

“Our focus on empowering the community to tackle these problems has made a real difference to the lives of countless young people across Bedfordshire.”

Reaching out and embedding the VERU within communities has been one of the unit’s biggest strengths. They have funded more than 40 community projects in their first batch of commissions, which reached more than 12,000 people across the county. This included plays in schools, diversionary activities such as sport and media production, as well as specialist projects aimed at girls, parents and children with learning disabilities.

This focus on community-based interventions has continued this year. More than £40,000 is being invested into work in schools, parenting programmes and outreach projects, with a similar sum being allocated to local town councils to improve community spaces which can provide a safe haven for young people.

Yet the professionals working for and alongside the VERU have also played a massive part in its success. Their Youth Intervention Specialists (YIS), under the leadership of Tasha Case, provide a comprehensive support service for young people at risk of criminal exploitation, as well as providing help in person for families and communities.

This team includes Roseann Taylor, whose son Azaan Kaleem was murdered when stabbed in Luton in March 2018, and Sheldon Thomas, the director of charity Gangsline.

The YIS team is currently working with some 70 young people and their families from across the county, taking the VERU’s mission to the frontline when tackling exploitation and improving the prospects of these young people.

The VERU were also pleased to have been able to call on the services of Dr David Kirby, an emergency medicine specialist and joint medical director at the Luton & Dunstable Hospital.

PCC Kathryn Holloway said: “After my initial discussion with him concerning the benefits of involving those who are quite literally at the sharp end of knife crime to get the message to combat youth violence across to young audiences. David has given uncompromising presentations to young people on the realities of knife crime when seen through the prism of our Accident and Emergency teams. This has been part of a wide-ranging series of VERU projects targeted specifically at alternative education provisions.

“Other VERU staff have been working tirelessly to ensure issues such as data, governance and open communications between different agencies involved in preventing violence and exploitation are now better coordinated, paving the way for a more cohesive system to tackle these issues in the longer term. We have much to be proud of – and good practise to share.”